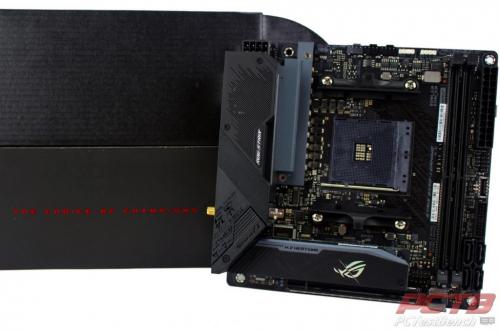 Asus’s ROG Strix B550-I Gaming certainly follows the company’s moniker of “The Choice Of Champions”. Most of AMD’s X570 chipset claim to fame is easily matched with the B550 chipset and the pint-sized Strix puts it to good use. We have exactly zero complaints about performance from top to bottom. Almost every one of our test came in with a bit better score than we were expecting. On the overclocking front, the ROG Strix B550-I knocked it out of the park as well. Our particular Ryzen 9 3900X does well to 4.25Ghz, and hitting 4.3Ghz is pretty tough. We were able to get 4.325Ghz all core stable pretty easily. Running at that speed caused the VRM heatsink to get warm, but not hot. In fact, we never got to see the VRM heatsink fan even come on. Not that it’s a bad thing, those tiny fans can get annoying, although ASUS has done a good job on other boards keeping active VRM heatsinks quiet.

On the software front, the audio software is a must. The Type-C audio port worked really well, and as much as we enjoyed the lighted analog outputs, it renders them almost useless for most. We had a stronger signal (read: louder sound) out of using the included adapter than the onboard ports. We do like that it natively supports 4-pin headsets (both headphones and mic outputs) as well as traditional 3.5mm 3-pin headphones. The AI Noise-Canceling works well and is a must for anyone who streams, chats, or records from home where things can get noisy. The rest of the software works just as well.

More ASUS Products we have reviewed