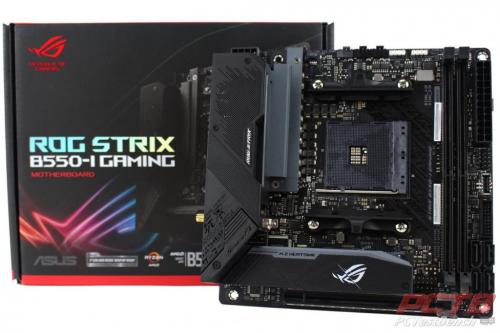 It wasn’t too long ago that picking out an ITX motherboard meant that you had to live with some pretty serious compromises. The ASUS ROG Strix B550-I Gaming keeps compromises to a minimum while making sure you have everything needed for a flagship gaming system. An ITX build removes most of the reasons to go with an X series chipset like PCIe bifurcation (important if you like things like SLI) but it gives you PCIe 4.0 support for fast storage and flagship GPU’s without the added cost. You get twenty PCIe 4.0 lanes, 16 to the main expansion slot, and 4 more to the primary M.2 slot. The B550 chipset itself doesn’t have PCIe 4.0 but it does have 3.0 lanes which are routed to a second m.2 slot on the rear of the board. You get most of the rest of the full-size ROG loadout as well. An actively cooled 10-phase VRM configured as 8+2, support for memory speeds well north of 5000MHz, 2.5Gb Ethernet and WiFi 6, and premium SupremeFX audio with Audio Type-C port. When you figure in a current max of a 16-core processor, 64GB of memory, and terabytes of extremely fast storage along with the latest graphics powerhouse, you’ll find that compromises are a thing of the past.

PC Test Bench would like to thank ASUS for sending over the ROG Strix B550-I Gaming for us to check out!

AI Noise-Canceling Microphone
AI noise-canceling microphone software is exclusively featured on ROG Strix motherboards and supports 3.5 mm, USB, or Bluetooth headsets. The utility leverages a massive deep-learning database to preserve the sound of your voice while eliminating distracting keyboard clatter, mouse clicks, and other forms of environmental noise. And it only places a slight load on the CPU, ensuring minimal impact on gaming performance.