PCMark 10 is the complete benchmark for the modern office. It is the ideal test for organizations that are evaluating PCs for a workforce with a range of performance needs. The tests in this benchmark cover a wide range of activities from everyday productivity tasks to demanding work with digital media content.
PCMark 10 uses a modular approach to build relevant benchmark tests around common end-user scenarios. A Test Group is a collection of workloads that share a common theme or purpose. There are four test groups in PCMark 10, we use three of them.
Essentials: covers the common, everyday ways that people use a PC. The workloads include Web Browsing, Video Conferencing, and App Start-up time.
Productivity: measures system performance with everyday office applications. This test group includes Spreadsheets and Writing workloads.
Digital Content Creation: This test group’s workload reflects the demands of working with digital content and media. The tests include Photo Editing, Video Editing, and Rendering and Visualization. 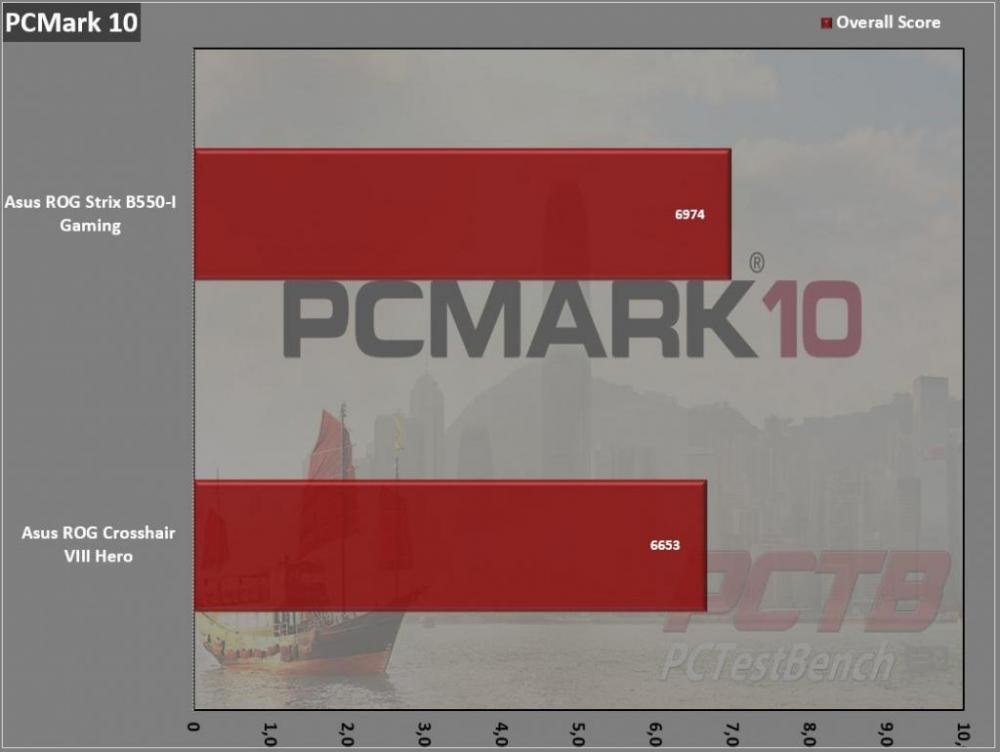 With the same configuration, the ROG Strix B550-I actually beats out the X570 equipped ROG Crosshair VIII Hero in the overall score.

WebXPRT 2013 uses scenarios created to mirror the tasks you do every day to compare the performance of almost any Web-enabled device. It contains four HTML5- and JavaScript-based workloads: Photo Effects, Face Detect, Stocks Dashboard, and Offline Notes.  WebXPRT is run with the latest stable release version of Google Chrome browser, in this case, Version 61. 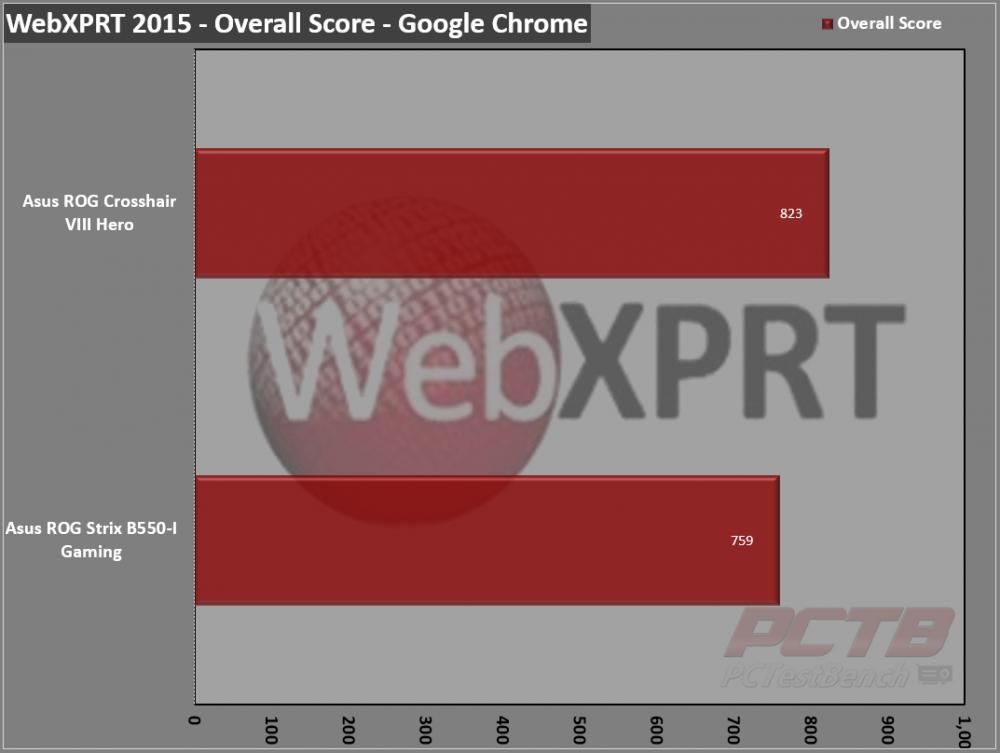 In our browser-based test, the Strix falls just a few points behind. 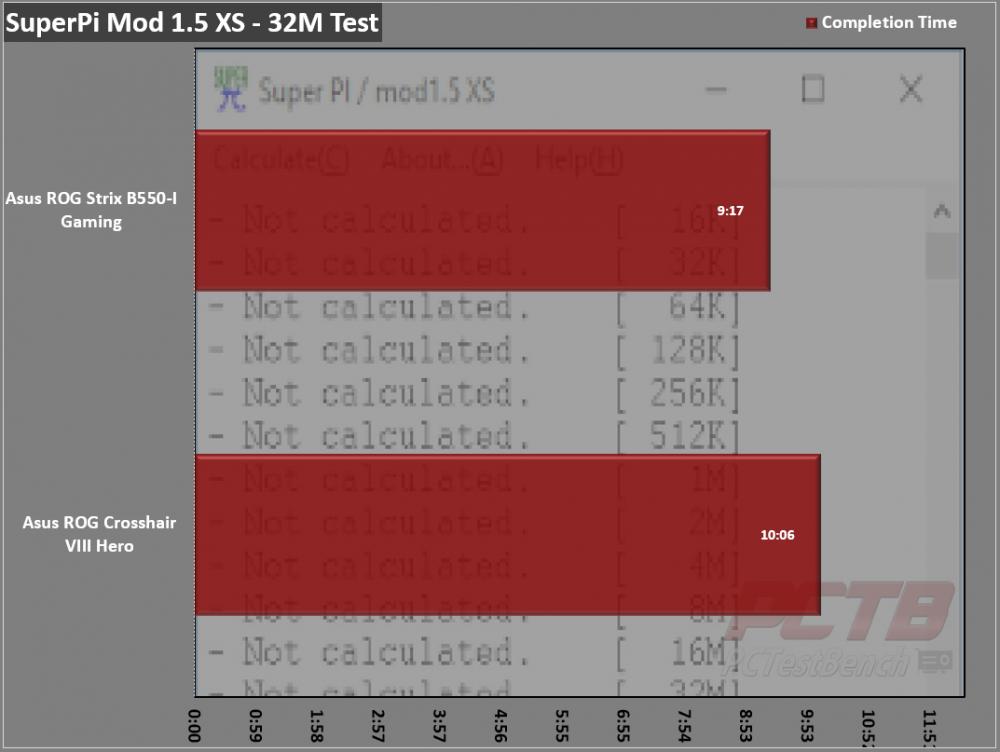 The Strix board shaves almost 50 seconds off the test.

Now, some time has passed since the Crosshair Hero came out, and drivers have likely improved, but the Strix B550-I holds a noticeable lead here in both single and multi-threaded performance.

The story is exactly the same with the newer Cinebench R20. 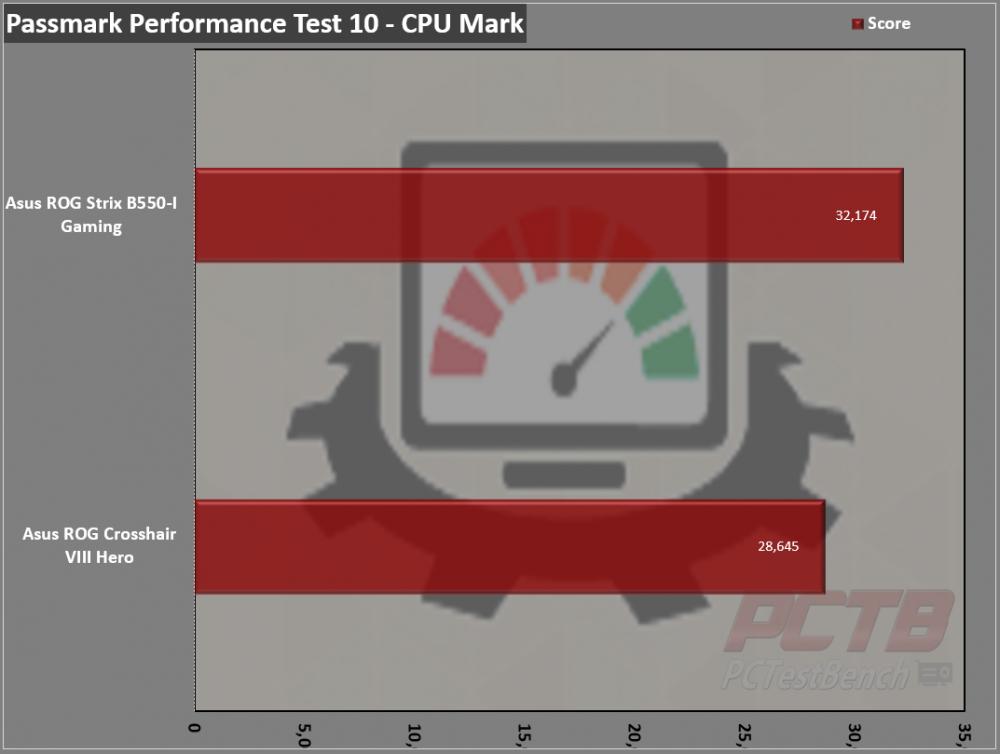 Passmark shows a very wide gap in the overall CPU segment of its testing. 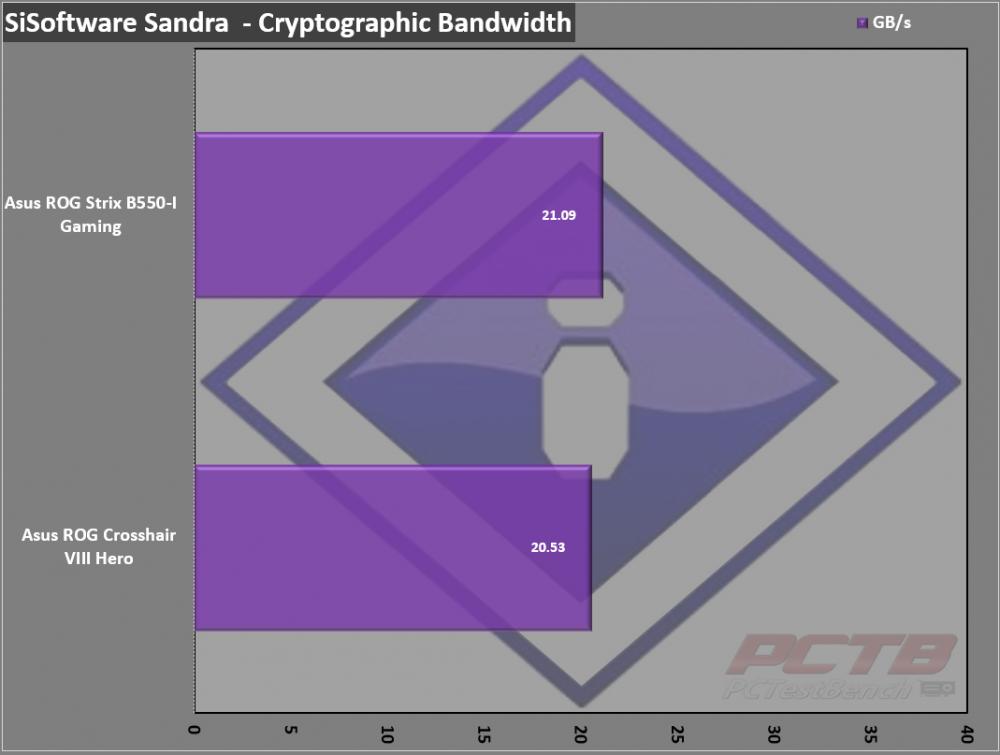 In SiSoft’s Cryptographic CPU Bandwidth test, the gap is narrow, but the Strix B550-I still retains its podium position. 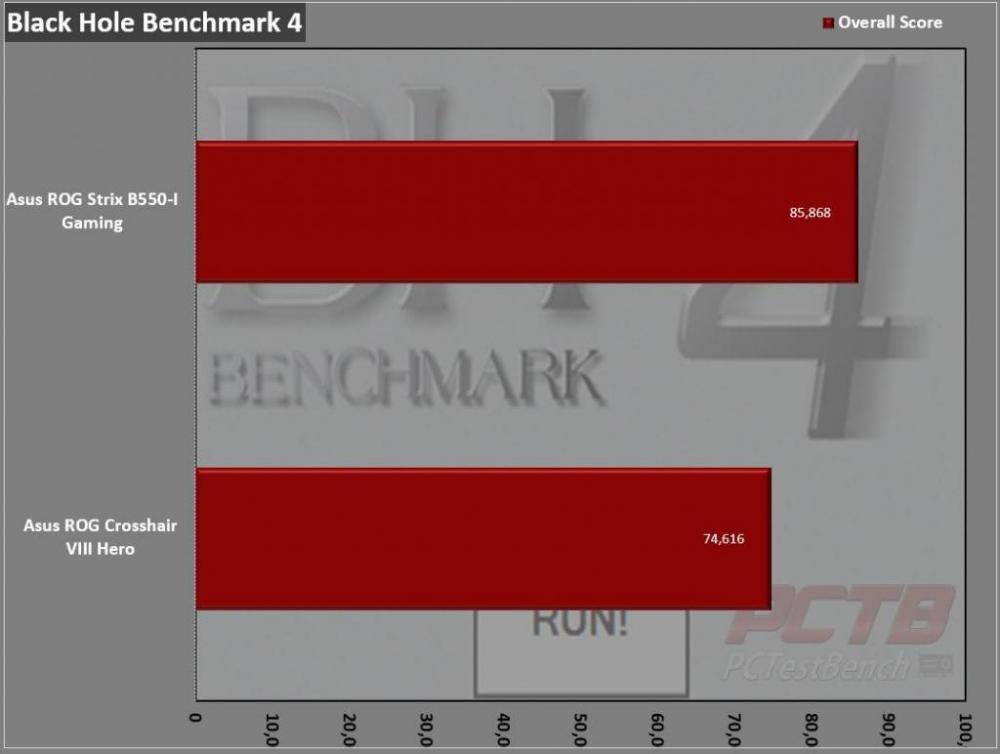 The benchmark shows a rating in MIPS (million instructions per second). The rating value is calculated from the measured speed, and it is normalized with the results of the Intel Core 2 CPU with a multi-threading option switched off. So, if you have a modern CPU from Intel or AMD, rating values in single-thread mode must be close to real CPU frequency. There are two tests, compression with the LZMA method and decompression with the LZMA method. Once the total passes reach 50, the score is taken. 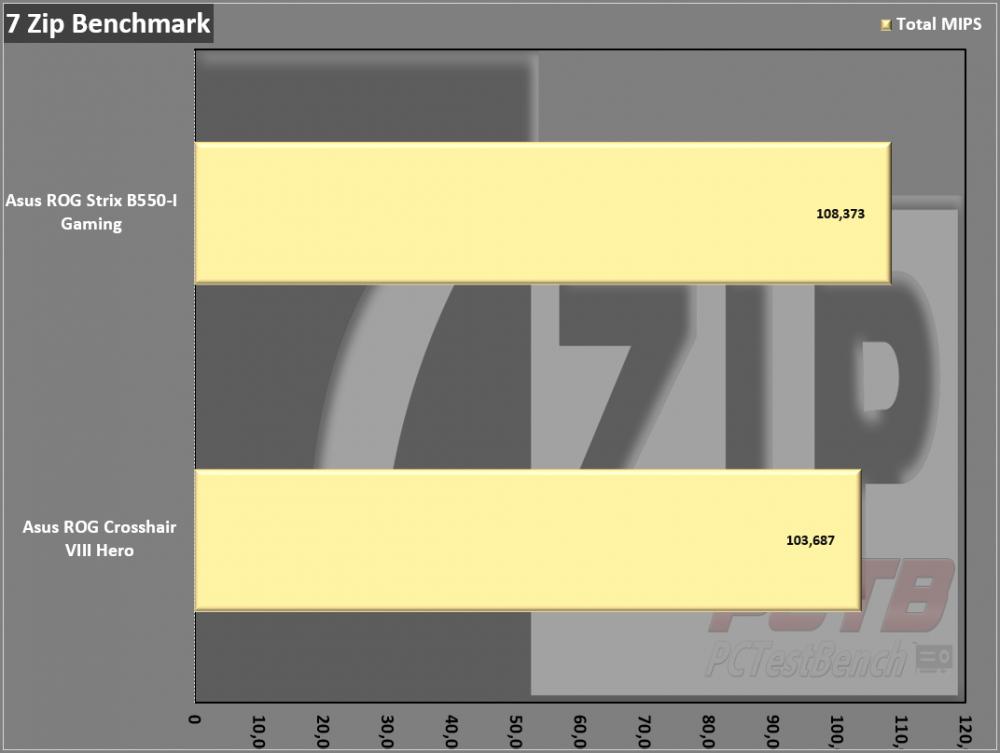 The Strix B550-I holds about a 5% lead over the Crosshair. 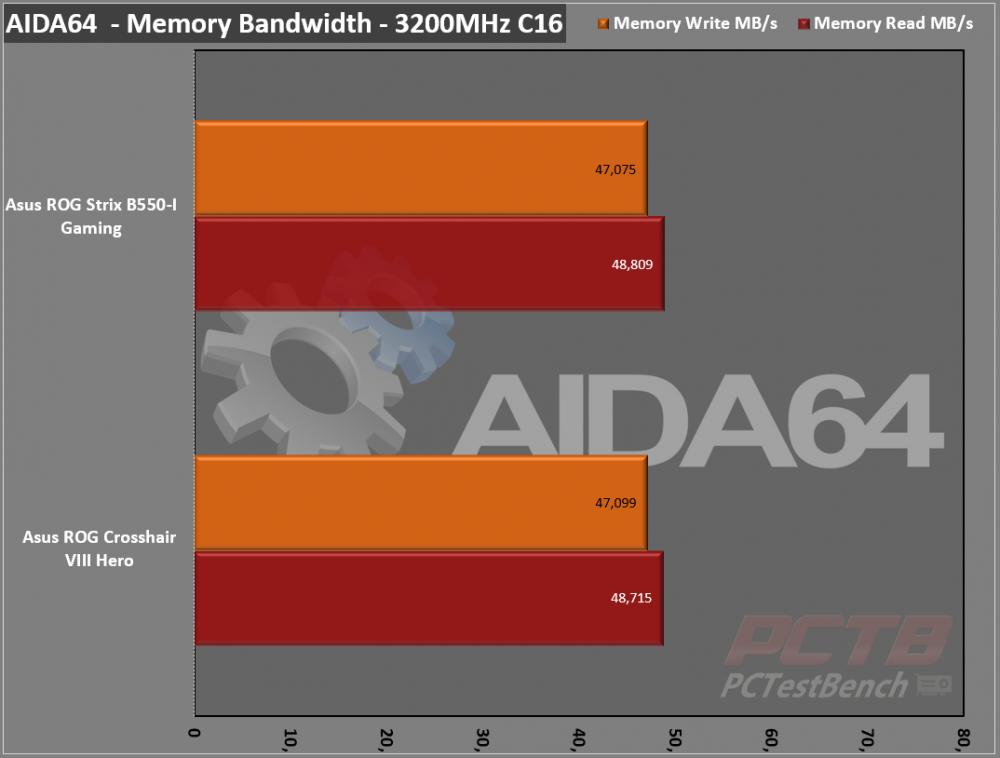 Expectedly, the memory bandwidth test is about a wash. The Crosshair wins slightly in writes while the Strix leads slightly in reads. 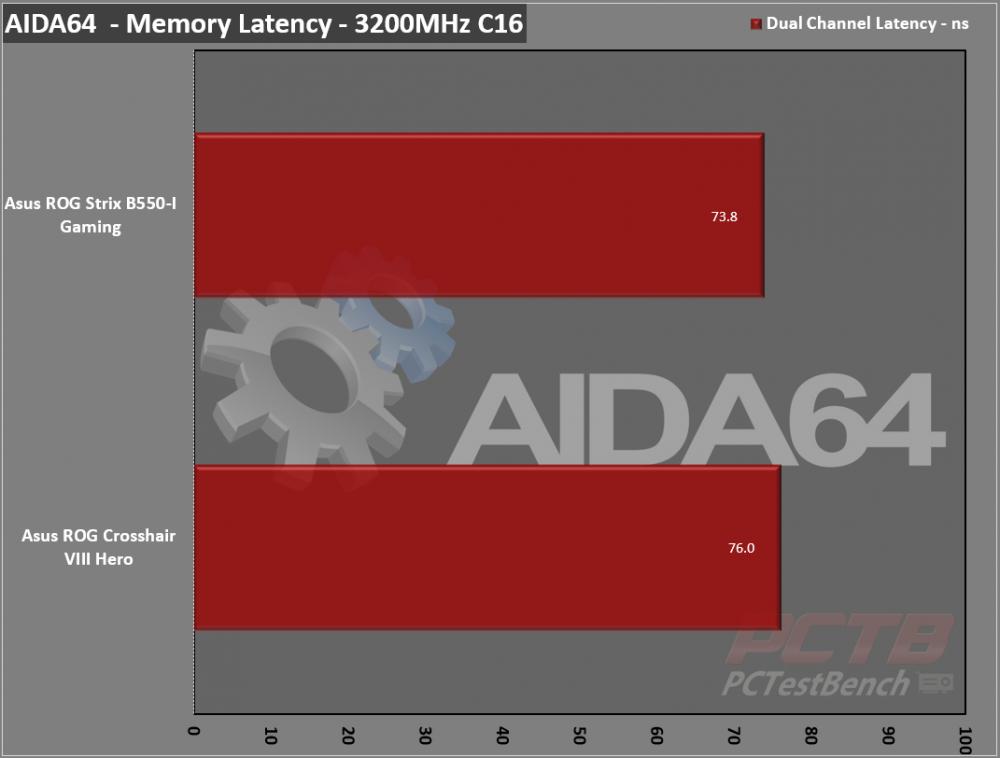 On the latency front, it seems the two-DIMM memory layout might provide a slight advantage here. 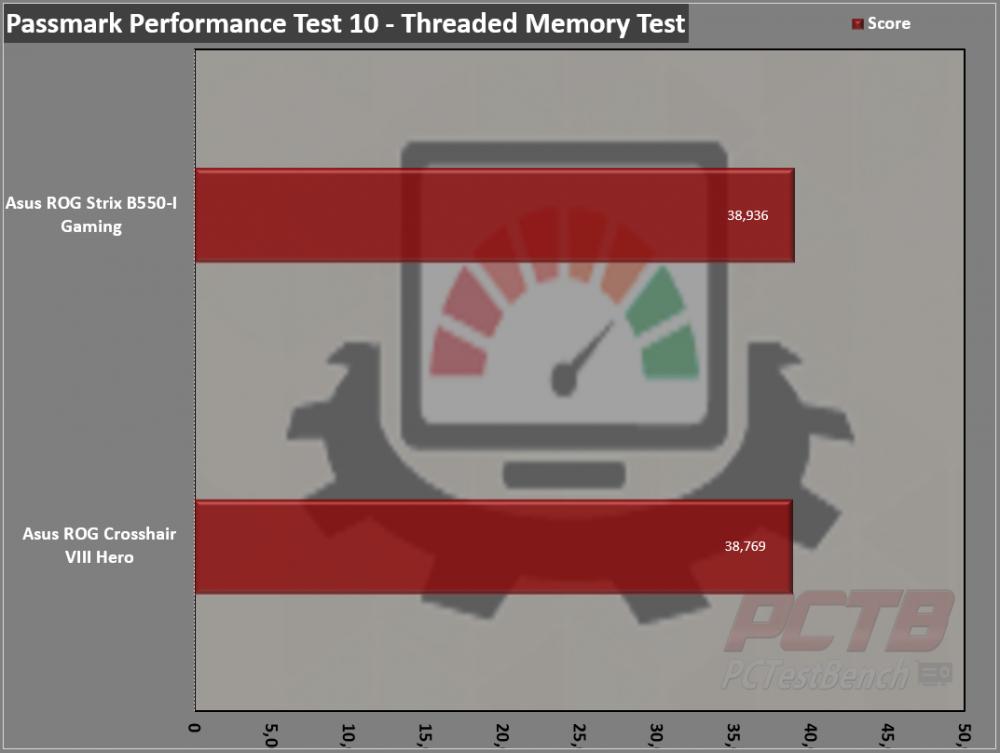 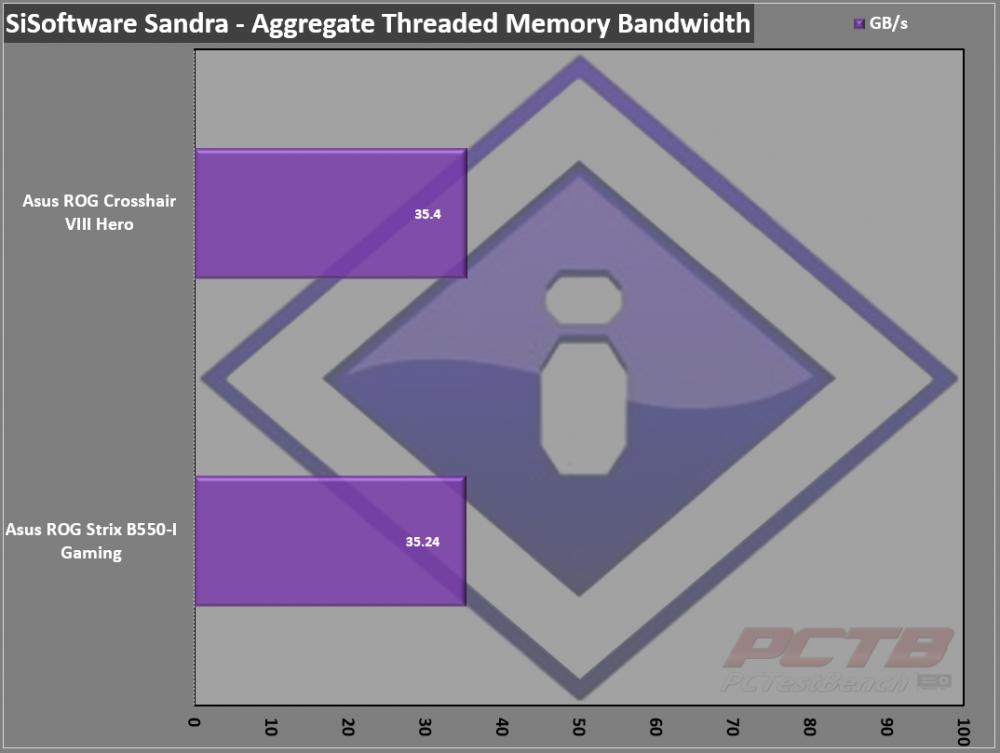 SiSoft is our only memory test where the B550 falls behind the X570 platform, but only just.