Nvidia’s GeForce RTX 3070 Founders Edition does a great job in Ashes of the Singularity but falls in between the 2080 Super and 2080Ti at 4K.

New Dawn shows a similar pattern with great performance up through 4K, and the 3070 FE holding a slight edge over the 2080Ti.

Here yet again we find the 3070 Founders Edition holding a slight lead over the 2080Ti and maintains average 4K frame rates above 60 fps BEFORE you even turn on DLSS.

Metro Exodus runs really well fully maxed out at 1440p with RTX off and RTX+DLSS providing close to 60 FPS. 4K users may want to knock the eye candy down just a touch, with DLSS being important for those who want to use Ray Tracing. 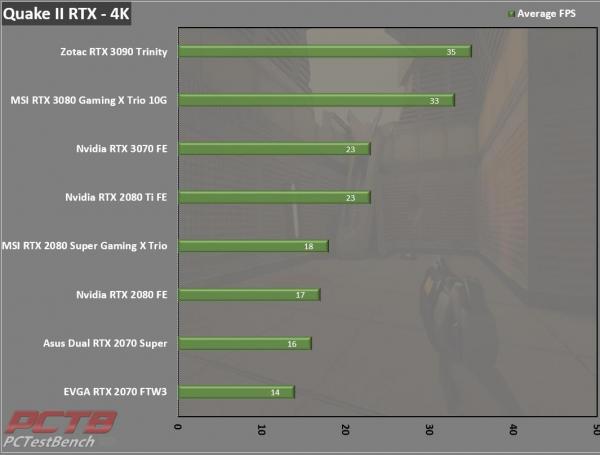 Minecraft with RTX brings fully path-traced rendering, physically-based materials, and NVIDIA DLSS 2.0 to Minecraft, delivering bleeding-edge visual fidelity and realism that can be experienced on all GeForce RTX GPUs.

At 4K with maximum chunk render distance, Minecraft RTX looks incredible and plays well on the 3070 Founders Edition with DLSS upscaling enabled. Raw Ray Tracing is faster than an RTX 2070 but less than an RTX 2080Ti. Once you add on DLSS, it flies ahead of both.