Toady’s alleged Nvidia RTX 3080 leak comes courtesy of users on ChipHell.  Please take all of this as nothing more than rumor, or a clever photoshop job.  It’s also possible these were early engineering samples and will not represent the finished product available to consumers in the future. However, It doesn’t stop of from wanting to take a closer look at a rather interesting design and trying to pick apart what some of the design cues may mean.

What we DO know so far about Nvidia’s upcoming Ampere based cards is rather limited. With current generation Turing cards are almost 2 years old at this point, many gamers are certainly getting anxious to see what’s coming next. Nvidia CEO, Jen-Hsun Huang announced at a Graphics Technology Conference (GTC) Keynote speech last month that Ampere with power all of it’s upcoming cards in a unified platform. This includes upcoming gaming GPU’s as well as professional, server and compute cards. While this will take some time to phase everything in and out respectively, it will be the first time Nvidia operated it’s entire customer base on a single platform.

We also know that Ampere will be based on a 7nm design with the full-fat GA100 core housing a whopping 54 Billion transistors. That’s more than double the roughly 21 Billion transistors in the current leader, the Volta based GV100 or the roughly 19 Billion in Turing’s big chip. That is a radical jump, even if you include the possibility of on-die HBM memory like the Volta based cards.

If you look carefully, you’ll notice that there are two cards here, one laying on its back plate at the  top, and one laying on it’s face at the bottom. There are two fans, one on the lower face near the Rear I/O, and one on the top near the front of the computer. It appears Nvidia is sticking with the Aluminum shell like the RTX cards carry, as evidenced by the blue protection film applied along the exterior.

The PCB is non-square! The red shaded area is roughly the shape of the PCB, and we see a large cutout towards the rear for the fan, but we also see that the PCB is quite compact overall with the cooler itself making up the difference to a typical GPU size. This isnt the first time this has happened, the current RTX 2060 Founders Edition cards do this, but it’s the first time it’s happened on an upper tier GPU like the upcoming RTX 3080 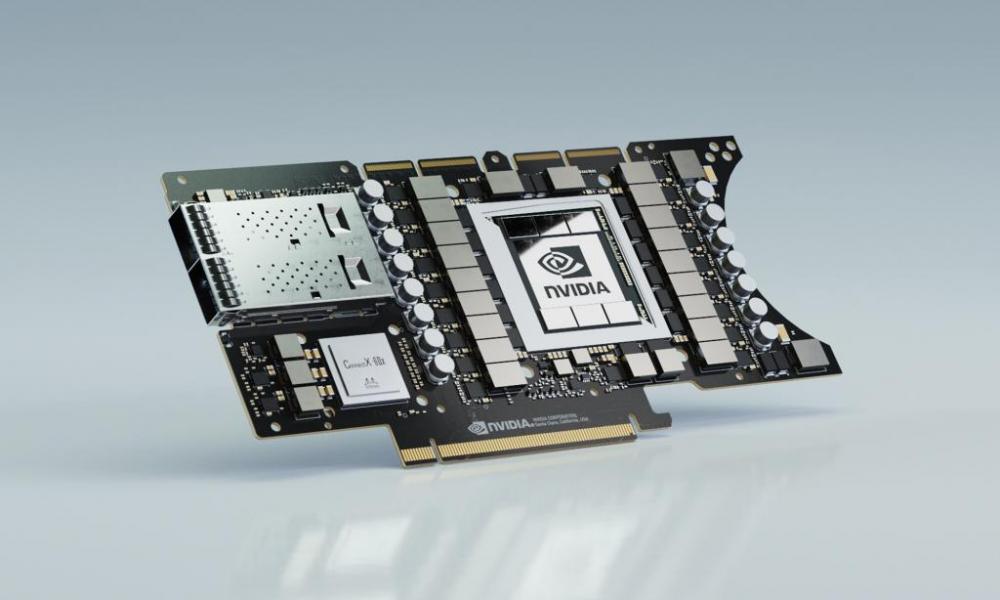 This isn’t much of a stretch given Nvidia showed off a render of their Ampere powered Tesla compute card with a similarly small PCB with non-square rear fan-cutout.

Air flow through this cooler is only something we can speculate at at this point based on what we can see. We feel the lower fan, closest to the rear I/O would intake air as normal, and exhaust both out the rear, and out the sides as normal. One thing to note here is that there are no power plugs on this side. Nvidia likely has them moved to the rear of the RTX 3080 like they did with the RTX 2060 Founders Edition. This is going to make after market water blocks a little more interesting for those that like to water cool.

What is hard to guess at is what happens with the new fan on the top (backplate) side of the RTX 3080. Does it blow straight through the card from bottom to top like a heat dissipating chimney (our blue lines)? or does it work on conjunction with the other fan in a push/pull configuration to draw air through the card an exhaust it out the top (our red line)? We feel the former is more likely. It’s possible it’s some combination of both, but we believe it to be a separate cooling zone, likely linked to the core via several heat pipes. while the normal fan blows over the core via Nvidia’s typical vapor chamber configuration.

We are likely still a few months away from launch, so any real specs are not known at this point. That hasn’t stopped internet based the rumor mill from churning out guess after guess, but we’ll let you go peruse those and make your own guesses.

Given the tightly packed nature of the Ampere based compute cards pictured by Nvidia recently, and their admission of moving their entire product stack to a single architecture, this cooler design is certainly plausible.