CPU-Z is a freeware that gathers information on some of the main devices of your system: 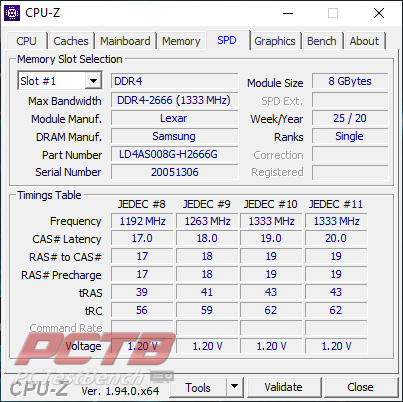 CPUz shows us we have a four JEDEC profiles and no XMP profile available, running at a maximum speed of 2666MHz effective with timings of 20-19-19-43 at 1T command rate. This is why Lexar is compatible with pretty much anything you can plug it in to with no worries about unsupported XMP profiles.

Thaiphoon Burner is the number one solution on the software market to work with SPD firmware of DRAM modules of PC. Thaiphoon Burner provides powerful features for reading, modifying, updating, and reprogramming SPD firmware of SPD EEPROM devices. The program fully supports all popular JEDEC standards for Serial Presence Detects and third-party enhancements, such as NVIDIA EPP and Intel XMP. Comparing to other software Thaiphoon Burner creates the most completed reports for any of the following SDRAM types of DIMM modules: PC SDRAM, DDR SDRAM, DDR2 SDRAM, DDR3 SDRAM, DDR2 FB-DIMM, DDR4 SDRAM, LPDDR3, and LPDDR4. This is achieved due to the universal built-in SPD decoding engine. 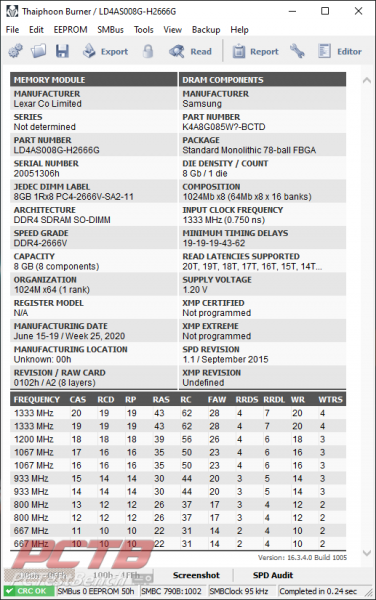 Here is the full readout if you want to look deep into the specs.

Bandwidth is a function of clock speed, so Lexar’s Laptop Memory comes in right in the middle where we expect. All 3 kits run at a CAS latency of 18, so the speed pretty well shows scaling right in line with speeds.

“Fast, easy to use, PC speed testing, and benchmarking. PassMark Performance Test 10 allows you to objectively benchmark a PC using a variety of different speed tests and compare the results to other computers.” 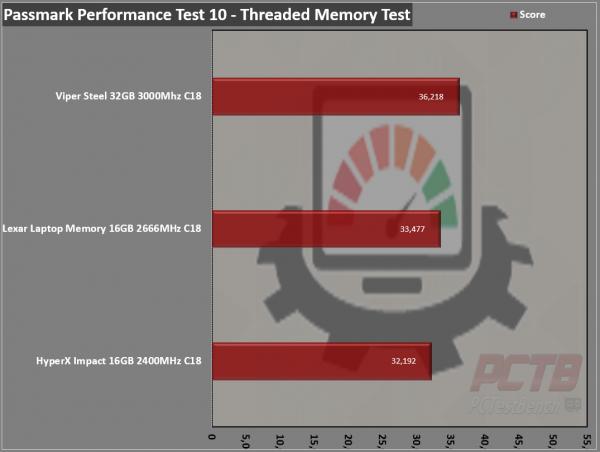 SiSoft shows the Laptop Memory landing about where we expected on bandwidth but just a touch low on overall score on SiSoft’s overall memory score.

The benchmark shows a rating in MIPS (million instructions per second). The rating value is calculated from the measured speed, and it is normalized with the results of the Intel Core 2 CPU with a multi-threading option switched off. So if you have modern CPU from Intel or AMD, rating values in single-thread mode must be close to real CPU frequency. There are two tests, compression with the LZMA method and decompression with the LZMA method. Once the total passes reach 50, the score is taken 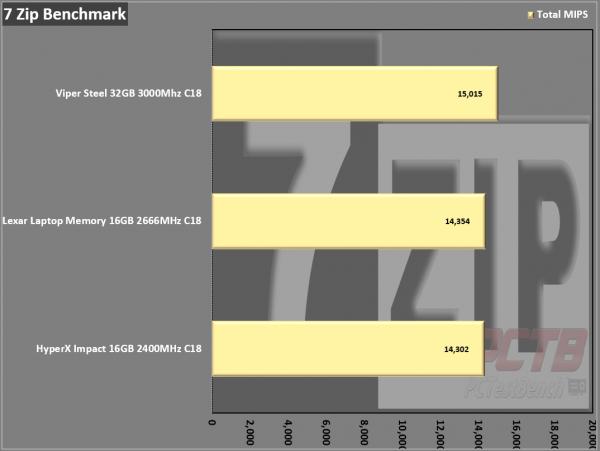 7-zip shows us performance right in line with what we expect from the speeds. 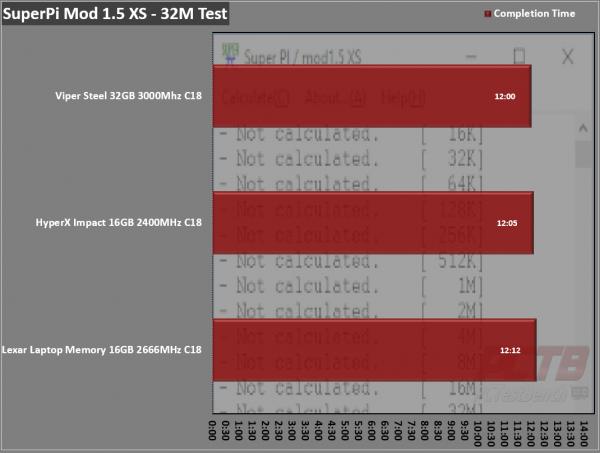 For CPU Intensive applications, memory bandwidth matters quite a bit. We see the faster memory kit here take the lead, but interestingly, the faster sub-timings of the HyperX Impact kit give it a small advantage over Lexar’s slightly faster overall speed.